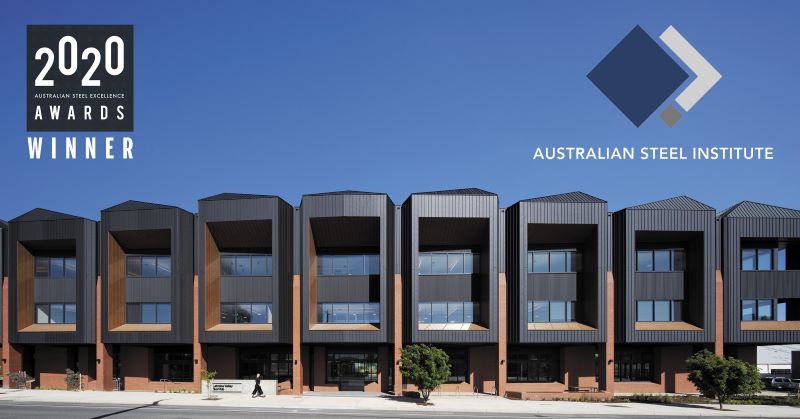 The award recognises what can be achieved when “out-of-the-box” thinking about design and construction is underpinned by close collaboration between all involved in building this three-storey regional government office, which was completed, ahead of schedule, in the second half of 2020.

Castlerock’s Head of Construction of the Latrobe Valley GovHub project says: “We took a radically different approach to this $30 million project by assembling the 18 modules on-site before lifting them into place – a technically demanding task requiring the highest level of craftsmanship.

“But having Dynamic Steel Frames and Industry Cladding as our partners in designing and constructing the modules – 14.5m high and weighing only four tonnes – made a complex engineering and construction task eminently feasible.”

The modules are one of the largest light gauge steel frame façade structures in the world.

The Morwell GovHub development is now the jewel asset in Auslink Property Trust No 2.

Castlerock’s Director Adam Bronts says: “This award shows what can be achieved when all parties decide to shun traditional approaches to design and construction and opt for a radical solution that has given Morwell a building it can be proud of.

“There’s so much to like about this project. In difficult economic times for the Latrobe Valley, it delivered jobs during construction and afterwards. We committed to using 75 per cent local content – and comfortably exceeded that target.

“The building, home to Parks Victoria, Solar Victoria and the Earth Resource Regulator, is set to achieve a 5-star NABERS energy rating. And there was constructive dialogue with the traditional owners to provide artwork and an interpretive panel on the ground floor.

“We have locked in a 15-year lease with the Victorian Government, with the option to extend for another 10 years via two five-year periods – a fitting reward for innovative thinking and excellent working relationships.”