Progress on the $30 million Latrobe Valley GovHub project in Morwell, Victoria, has taken a dramatic step forward with the installation of 18 prefabricated steel façade modules.

Each module measures 14.5 metres high, weighs four tonnes and is made from approximately 2.2 kilometres of steel, making them some of the largest light gauge steel frame façade structures in the world.

The team at Castlerock worked very closely with Dynamic Steel Frames and Industry Cladding to design and construct these bespoke spiderweb-style frames.

A true engineering feat, the innovative modular solution was the result of a year’s worth of planning and design, said Castlerock Property Head of Construction and Latrobe Valley GovHub Project Director, Aaron Ballenger.

Mr Ballenger said the sheer size of each module required state-of-the art technology and the highest level of craftmanship to bring them to life.

“The team has worked long and hard in both the preparation and fabrication of the modules and it took a huge collective effort to execute what was a technically complex and highly detailed design,” he said.

“The execution of the module lift onsite was also a logistical challenge, so to see these impressive structures safely installed has been very satisfying for everyone involved.”

Castlerock’s Adam Bronts said the project would make an important contribution to the local economy, both during construction and following completion.

“It’s wonderful to see this flagship project on track to help revitalise the Latrobe Valley when it opens later this year by supporting economic growth, creating jobs and driving the industries of the future,” said Mr Bronts.

Castlerock will retain ownership of the Latrobe Valley GovHub as a flagship asset within its Auslink Property Trust No. 2. It will also manage the building once completed. 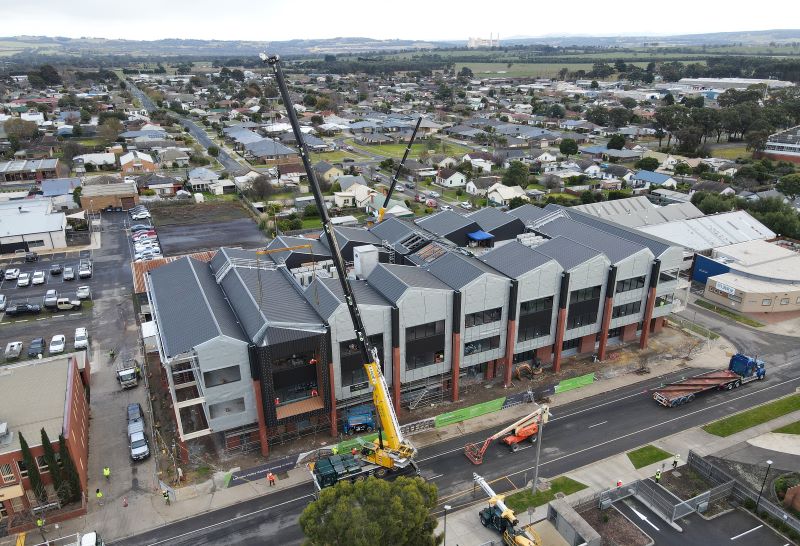